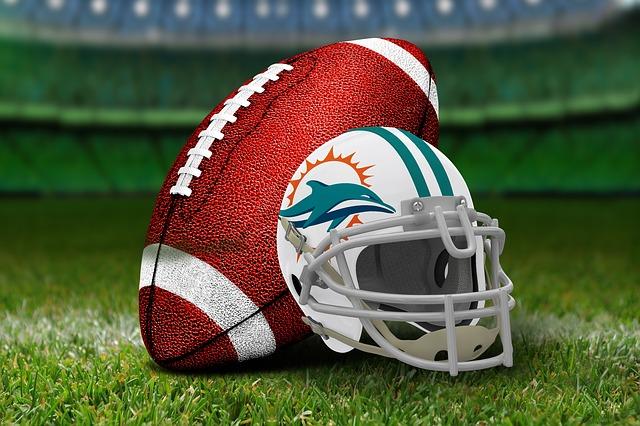 It is hard to overstate the popularity of American Football in the USA. 101.1 million television viewers and 11.2 million streamers watched the 2022 Super Bowl LVI. This means that approximately one in every 3.5 Americans tuned in to watch the game.

It is not only the Super Bowl itself that is hugely popular, but millions follow the action of every game all season. With just 16 games in the regular season, each game can make the difference between going through to the playoffs or being left behind. Although fans spend massive amounts of time analyzing each player and strategy, there are often surprises on the day. This is what keeps fans interested and makes it such an exciting sport to watch.

The NFL Miami Dolphins have a long and illustrious history with the NFL, dating right back to 1966. They dominated the game throughout the 1970s and their fans are always waiting and hoping for a return to that form.

The 2021 season was a remarkable one for the NFL Miami Dolphins. They followed a seven-game losing streak with a seven-game winning streak. It was a true rollercoaster ride for everyone and showed how unpredictable the NFL could be.

This article will take a look at the history of the NFL and the Miami Dolphins. It will also go through some fantastic betting strategies players can use to bet on the NFL and the Super Bowl.

History of the NFL

American football developed in the colleges of the USA during the late 1800s. It started as a combination of soccer and rugby, with 25 players on each team. Just like soccer or rugby, the aim of the game was to get the ball into the opponent’s goal.

Over the years, it continued to develop. However, it proved quite violent and led to serious injuries and even a few deaths. Because of the issues with safety, 62 colleges came together and created the National Collegiate Athletic Association (NCAA). The association’s task was to unify the game by setting rules and making it safer to play.

American football players at the time were college students who played the game at an amateur level. Over the years, it became apparent that it was better to formalize the payment process and make the players professionals. In 1920, the National Football League replaced the NCAA. Its purpose was to address all the issues surrounding players and move the game to a professional level.

History of the Miami Dolphins NFL

In 1966, actor Danny Thomas and politician Joe Robbie founded the NFL Dolphins. The Dolphins made it to the Super Bowl VI in 1971 and played against the Dallas Cowboys. Unfortunately, it wasn’t a great game for them, as they lost 24-3. However, the following year, the NFL Dolphins came back and won the NFL’s only perfect season. They won all their regular games, three pre-season games, and the Super Bowl VII. It was a triumph, and no other team has ever matched their achievement.

Other achievements of the Miami Dolphins NFL

The Dolphins NFL followed this success by winning the Super Bowl VIII in 1974. However, they also competed in Super Bowl XVII and XIX but lost both times. Still, their head coach Don Shula is credited with bringing them continued success throughout the 80s and 90s. Under his guidance, the NFL Dolphins only posted losing records in 2 out of 26 seasons.

The 2000s have not proven to be as successful for the Dolphins NFL. After the retirement of Shula and their star quarterback, Dan Marino, they struggled to find their previous form. However, there have been successes over the years, and fans continue to wait for the return of the NFL Dolphin glory days.

The first stage in the NFL season is the drafts. It is held at the end of April every year, where each team can select players or trade them with other teams. The teams are placed in reverse order of their position in the previous year. Therefore, the Super Bowl winner will choose last, and the team that finished last will choose first.

There are six rounds in the process, and if the team does not make their selection in the allotted time, the next team can pick before them. The first round is only 10 minutes long, the second is seven minutes, the third to sixth is five minutes, and the seventh is four minutes. So, the pressure on the teams to make the right selection within the time limit is intense.

In 2022, draft results ended in the addition of four new players to the team. The Dolphins didn’t make a pick in the first, second, or fourth rounds. Instead, they waited for the players they really wanted and moved quickly to secure them. The NFL Draft Miami Dolphins worked well for them in 2022, but it doesn’t look like they made any groundbreaking picks. However, it showed that they are aiming to win next season and are preparing themselves for upcoming challenges.

The NFL gives bettors so many great betting options. Players can use all the customary types of bets ranging from the classic moneyline, to over/under, point spreads, teasers, parlays, and even futures bets. In fact, the NFL offers the perfect opportunity to take some unique betting risks and try to win big. The Miami Dolphins have proven to be a fantastic team to bet on over the years. They often surprise pundits and have had some spectacular and unexpected wins.

Even before the season begins, players can wager on the draft. The most common draft bet is the first overall pick. However, there is a wide variety of other bets to choose from. For example, bettors can wager on a team’s first player to be drafted, the second, third, and fourth stage picks, and so on.

During the season, sportsbooks offer bettors a huge number of betting options. Teams play once a week on a Sunday. Therefore, the sportsbooks and the bettors have time to weigh their options for the next game. Bettors can track the movements on the lines to see which team the betting market predicts will win and which will lose. They can also work out more complex bets, like parlays and futures.

Types of bets on the NFL Dolphins

This is the simplest kind of bet. A classic moneyline bet is a straight-up bet on the winner or loser of a game. It is helpful to look at an example to understand this bet.

In this game, the Dolphins are the underdogs. The bettor knows this as the Dolphins’ odds have a + in front of them. If the bettor wagers $100 on the Dolphins to win, and they do so, they will receive $150 on top of their original wager. However, if they bet on the Packers, they will win $83.33 plus the $100 wagered.

This is a more complex type of bet. The point spread is the range of scores within which the teams can win. Generally, a point spread will look like this:

The Buffalo Bills are the underdogs in this game. The point spread means they can win outright or by one, two, or three points. On the other hand, the Dolphins are the favorites. They need to win by four points or more. Therefore, the Dolphins have to work harder to cover the spread, so the bet acts as a handicap.

The total is the combined total number of points scored in a game. The sportsbook uses various measures to assess how much they expect each team will score. Bettors wager on whether they think the score will be over or under that total amount.

An example of this would be if the Dolphins were to play the New York Jets. The sportsbook predicts the score to be 35.5. Once the game is over, the Jets win by 32–24. Therefore, the combined score is 56. Bettors who have wagered on the score being above 35.5 would have won. Whereas those who bet on it being below 35.5 would have lost.

This can be a great bet to place, as it is not dependent on who wins the game, just what the total score is. Bettors can analyze the scoring history of the teams and come up with a good idea of how they tend to score. This will allow them to estimate whether it will be a high- or low-scoring game.

These bets are trendy throughout the NFL season, particularly in the draft round. The prop bet, otherwise known as a proposition, asks a question. The question could be ‘Who will be the first quarterback selected?’ or ‘what position will a team be assigned in round three? ‘. Prop bets have become increasingly popular during the draft stage in recent times because they offer bettors numerous ways to add some more excitement to the proceedings.

Of course, prop bets are not exclusive to the draft stage, as they are also used throughout the season and in the Super Bowl. A great Dolphins prop bet could be to wager on where they will place in the AFC East or an over/under on their final score at the end of the season.

The first thing to consider when thinking about betting online is to find a reputable and reliable licensed site. This is a vital first step, as it means that your money is protected. In the USA, licensing laws vary from state to state. Therefore, checking if online betting is legal in your location is important.

Shopping around for good odds is a great strategy. Bettors can look at different sportsbooks to find the ones that offer the best lines. Although it does mean that they need to register with multiple sportsbooks, it can be worth the effort in the long run.

NFL Dolphins -what to look out for

When considering placing a bet on a Dolphins game, there are a lot of things to keep in mind. Understanding how they have performed in their recent games is a great starting point. This will indicate whether they’re having a high- or low-scoring season. Bettors can use this information to make over/under bets on games.

Another way of coming up with fantastic betting ideas is to look at the team make-up. Pinpointing who the strong players are and who is not performing so well can give bettors plenty to base their wagers on. For instance, a prop bet can be placed on the number of touchdowns a certain quarterback will make.

The NFL offers bettors great opportunities to place some fantastic wagers. Fans of the Dolphins can place bets on many aspects of the draft stages and throughout the season. Sportsbooks work hard to anticipate the kinds of wagers fans will enjoy, and they adjust the lines to move the market. Dolphins fans can use this to their advantage and wait before placing bets to find the best odds. Shopping around for odds and watching the lines are just two of the best strategies to help you increase your winnings on a bet.

The long history of this team has been one of wild successes and crushing defeats. Although they have shown that they know how to put together a winning team and are able to lead games, there is still a long way to go before regaining the dominance they showed in the 1970s.

Betting on the Dolphins and the NFL can be great fun, but it is always important to remember to set a budget and stick to it. Reputable sportsbooks will have resources available to help bettors manage their money. They will also be able to assist anyone who feels that they are developing an issue with betting. Just remember to bet responsibly and have fun!